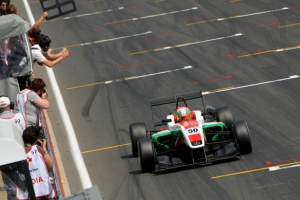 Sam MacLeod emulated his race one success in the third and final race of the weekend in the 2014 Cooper Tires Formula 3 Championship. While MacLeod capped a fine weekend for the Fortec Motorsport team, it was a race that almost proved costly for the team as Martin Cao and Matt Rao had a collision that ended Martin Cao's race and hindered Rao's pace.  Handbrake release problems gave Sam a poor start, but  MacLeod fought back  and quickly worked his way back up the field to third position. with just over a second separating the leading three Fortec cars after six laps. By the seventh lap, it became less than a second. That was as close as the Fortec racers were to get. Montreal saw the end of the battle as Sam put Cao under pressure and Cao and Rao collided. Cao's race came to an end there and then, while Rao limped on with a damaged car. Cao's halt signalled the safety car which saw MacLeod's large lead slashed. When the safety car returned to the pits five minutes later, MacLeod stormed into a decisive lead, while team-mate Rao had a lot of ground to make up. MacLeod was grateful for incidents that fell in his favour. "I had a poor start, lost a few positions and had to make them up," said the race winner. "I waited for an opportunity and got one, the pace was strong. Then the safety car came out and I had to rebuild my lead on the restart. You can't predict a safety car, you never want one, but I knew we had the pace to overcome it." - See more at: http://www.formula3.co/news/macleod-takes-second-victory#sthash.VqK7XMgc.dpuf