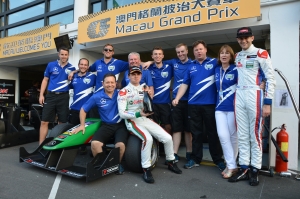 What a race at such a special place! A good start by Sam from P4, and by lap 5 he was running in 2nd place and eyeing a podium, setting the scene for one of the great surprise results of the year to expectations in the Formula 3 paddock. However as the fight with the race leaders continued, on lap 8 Sam had a moment on the challenging mountain section and picked up a puncture that forced him into the pits for a tyre change. Undaunted Sam after going back out set a time of 2m10.2s, faster than the race leader and 1.5s faster even than Max Verstappen's record set last year. One to remember and a great end to the season for Sam, Team West-Tec, our sponsor Castrol, and our engineer Mick Kouros! Here's the entire race and prize giving on the FIA website!!! http://livestream.com/fia/macaugp