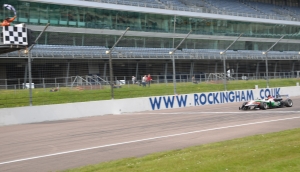 (Rockingham 5 May 2014) Sam won the second race of the Cooper Tyres F3 International Series at Rockingham this morning. The reverse grid format of this race meant that he started 4th on the grid, but after a good start he had moved into first place by the first corner, a position he held until the chequered flag. "Of course I am very happy with the start, and with the performance of the car and the team. I am especially pleased that the Castrol car has had such a good showing on its first appearance in British F3, and that we are writing a new chapter in the long history of Castrol and single seater racing"