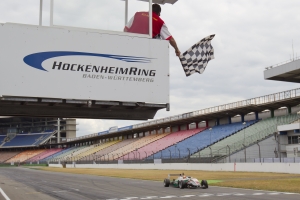 14 June 2014 (ATS Formula 3 press release) Following a disastrous penalty plagued weekend at Red Bull Ring, Sam MacLeod proved himself again in today's second race. Contesting for Van Amersfoort Racing, the Briton moved to the top immediately after the start and won the reversed-grid race at the 4.574-km Hockenheimring in a commanding manner. Santino Ferrucci from Eurointernational secured his first podium finish when he grabbed second place. Indy Dontje, who contests for Team Lotus, took third place. The international starting grid of the ATS Formula 3 Cup battled for seconds again in temperatures of about 20 degrees Celsius. The fourth round takes place in the support programme of the “Stuttgarter Rössle” in Baden-Württemberg, Germany. Pole-sitter Nicolai Sylvest from Denmark (JBR Motorsport & Engineering) did not have a good start and had to let Briton Sam MacLeod (Van Amersfoort Racing / both Dallara F311 Volkswagen), Santino Ferrucci from the U.S. (Eurointernational / Dallara F311 Mercedes) and Malaysian Weiron Tan (Van Amersfoort Racing) pass. The 16-year old Dane defended his fourth position in exciting duels with Dutchman Indy Dontje, who was on his tail. Markus Pommer (both Lotus) passed Dontje but subsequently collided with Malaysian Nabil Jeffri (Motopark / all in Dallara F311 Volkswagen). The 20-year old from Kuala Lumpur had to retire right away, the current championship leader followed shortly afterwards. Dontje also succeeded in his battle against Sylvest who put in a great performance until shortly before the end of the race, despite having lost the pole position. The 21-year old from Schoorl used his chance to start a furious pursuit, which secured him a podium finish, in third place. Tan took a thankless fourth place. 16-year old Ferrucci who is contesting his second racing weekend in the ATS Formula 3 Cup, made his debut on the podium, having finished second. MacLeod was back on top of the podium after his streak of misfortune. The last ATS Formula 3 Cup race before the summer break will start at 1.25 p.m. tomorrow. Live timing will be available at www.formel3.de. Sam MacLeod: “We had a bit of a break from being up here on the podium. Now it is nice to get in the lead, to have a quick start, build up a gap, and it was easy to control the race from there. So we will do a bit better in the qualifying next time and we will do this more often this year.” Santino Ferrucci: “It was a great race. Sam got a really good start and then I was kind of right behind him. It was really hard to maintain the consistency. I had no chance catching Sam. He was way too fast, but it was such a good race.”