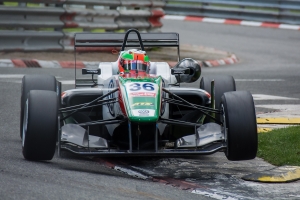 Further strong improvement from Sam and Team Motopark at the F3 Grand Prix at Pau. Sam finished in top 10 after an exciting race 2 and despite damage to the car, putting his first championship points on the board at last after all the early season technical issues. Race 3 was set for another strong result until the last lap, when a collision determined by the stewards to have been caused by the the driver of a damaged car which was limping around the track denied Sam a second points scoring finish. "Despite neither the team or I having been here before we put in another good performance improvement, and showed that we can have two drivers consistently in the top 10.  I hope we can build on that progress in two weeks time at Monza!"