Sam denied the opportunity to shine in Holland
7th July, 2014 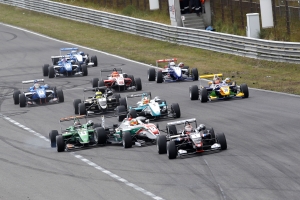 “I'm disappointed not only for myself but for my team Van Amersfoort Racing" Sam was in action at the Zandvoort Masters race in Holland this weekend, teaming up with Van Amersfoort Racing for the annual F3 invitational event. Sam put in a stand out qualifying performance setting the second fastest time, to line up on the front row of the grid for the 60-minute race on Sunday alongside pole sitter Max Verstappen. The start of the race saw Sam make a strong challenge off the line on Max, but as they headed into the first corner Sam was nudged from behind by his team-mate Jules Szymkowiak, which resulted in him being shunted off the track and into instant retirement. Szymkowiak was subsequently given a 20s time penalty for avoidable contact. Despite the disappointment of not finishing the race, Sam relished the opportunity, and did a solid job in Holland. Said Sam: “I qualified well and made a good start in the race, and was putting Max under pressure, so I am sorry that my race ended so early. It was a disappointing outcome for me and for the team who have worked so hard all week preparing for this event. This is a unique race so I would have liked the opportunity to show what I can do. But that is racing and we will put it behind us and move forward”