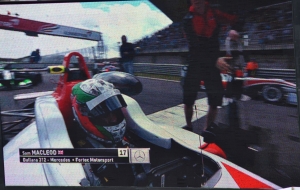 Sam will contest the 63rd Macau Grand Prix next weekend for Fortec with the goal of building on the good run he had in the event last year, where he ran as high as second in the GP before picking up a puncture. “My principal sponsor Castrol’s funding in 2016 was hit hard by the decline in the oil price and so this year has all been about focussing our resources and energy on a return to Macau, which for me is the greatest single seater race in the world”. Sam and Fortec prepared for Macau at the Zandvoort Masters of F3 in August and a round of the F3 Eurocup at Monza, where Sam showed his overtaking flair and mastery of slippery conditions. “ I am very pleased to be back with Richard Dutton and Trevor Foster’s Fortec team, Mercedes and my great engineer Mick Kouros. I began my single seater career with Fortec and a double pole in my first ever race, and Mick and I showed last year that we could really surprise a lot of the big budget teams at Macau. Fortec have great experience to bring to bear. It should be a good fight!”