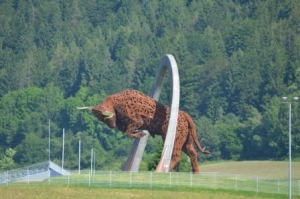 After a very strong performance in qualifying, where he was only 2/100 of a second behind Championship leader Markus Pommer, Sam thought he had made a perfect start from second position on the grid at the sun bathed track in the Austrian mountains, which is preparing for the first visit of Formula 1 in a few weeks time. However race control decreed he had jumped the start and Sam had to serve a drive through penalty, putting him at the back of the pack and with a big hill to climb. He fought his way back to 6th position, bagging fastest lap of the race on the way, despite some very close racing. That puts Sam in position 3 for the start of the reverse grid race this afternoon.